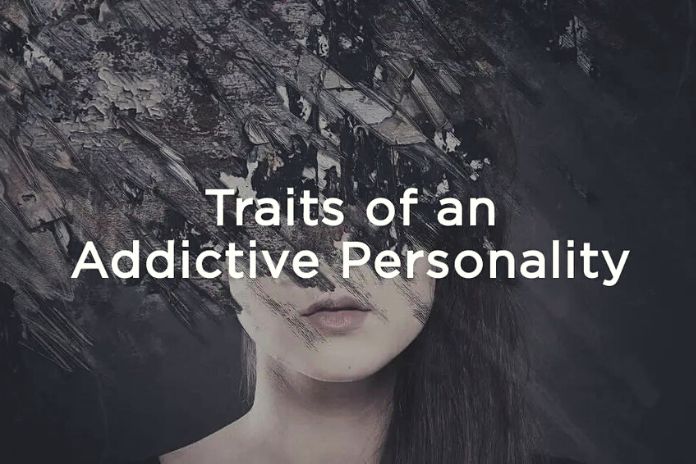 Some people are more vulnerable than others to addictive behavior. Certain personality traits increase this risk. We talk about it in this article. Addictive personality traits allow us to understand certain behaviors. There are people with a more significant tendency to have some kind of addiction: gambling, cannabis, pornography, alcohol, and psychotropic drugs.

While it is true that we will never be able to predict 100% who can fall into one of them and who can’t, some factors are usually quite significant. Somehow, we all have some obsession or need for something. There are activities we have to do frequently because they make us feel good, make us happy or help us relax.

From a clinical point of view, these are not addictions as such. On the other hand, addictive behaviors hinder the smooth running of everyday life. That’s when we lose control Identifying addictive personality traits means identifying those that, on average, make the person more vulnerable when drifting. Without a doubt, it can be helpful in psychotherapy.

Personality Traits That Are Addictive

It’s essential to know how to differentiate over-enthusiasm from addiction. There will be those who, for example, love video games and dedicate all their free time to them. However, as long as work and academic obligations are fulfilled and interpersonal relationships are not neglected, we cannot consider it an addiction.

Addictive behaviors refer not only to the use of substances but also to drugs, alcohol, or psychiatric drugs. The Diagnostic and Statistical Manual of Mental Disorders (DSM-V) includes addictions to gambling, pornography, technology, the Internet, and even certain foods. It is interesting to know, therefore, what personality traits are addictive. We cannot ignore that teenagers are more likely to engage in these behaviors.

People with low social skills, such as men and women, have just gotten out of a romantic relationship. Young people with problems in college or university. We could give a thousand examples of how people withdraw into themselves, avoiding contact.

Isolation and addiction often go hand in hand. Studies such as those conducted by Necmettin Erbakan in Turkey show that loneliness is usually at the root of adolescents’ Internet or video game addiction.

One of the addictive personality characteristics is the presence of psychological conditions such as stress and anxiety. Many people channel these states through food. Hence the anxious and compulsive hunger.

An impulsive personality is often behind addictive behaviors. They are people unable to control their desires, regulate their behavior and manage their emotions. At the same time, they tend to want to try new things, try different sensations, and not know how to say no when something is offered to them, even if it is harmful.

Lack Of Meaning, Goals, And Commitments

According to psychiatrist Viktor Frankl, what gives sense and purpose to being human is having a vital meaning, believing in something, committing oneself to a goal, and having plans; when the person lives an empty life, devoid of purpose and conscience, without expecting anything from themselves or the future, the risk of falling into an addiction increases. Those with addictive personality traits usually cannot sustain commitments over time, change jobs frequently, and generally don’t know where they want to go, feeling adrift

When a person with addictive behaviors recognizes that they are having difficulties, they usually blame their environment. “When I was little, I didn’t get enough attention,” “My family doesn’t leave me alone,” or “They don’t appreciate me in my job” are common excuses used to justify excesses. The individual does not perceive himself as an agent of change for his harmful behaviors, so he tends to project his problems outward.

I Don’t Have A Problem: Provocative Denial

Another addictive personality trait is denial. When they have a problem, if something goes wrong or they are facing a dangerous situation, it is common for them to deny what is happening to them. Many show a defiant or contemporary attitude toward those who support them, towards those who care for them.

The intense fear of failure, the anguish of not being what others want, and the lack of confidence in one’s abilities are characteristics of an addictive personality. These individuals have a higher risk of addiction problems as they harbor a complex emotional world.

There are deep fears that camouflage themselves behind a shell of aggression or indifference, trying to mask deep insecurity and even fragility. He is a fickle person who tends to be in the wrong company, trying to kill time with activities that do not allow thinking. Things that help to forget and calm anxiety.

The Feeling Of Superiority Or Inferiority

Very polarized behaviors can be found among people with addiction. Some tend to feel superior to those around them, forging an image of leadership or being prodigious at what they do. They show selfish behavior and a tendency to manipulate.

Other individuals, on the other hand, have low self-esteem. This negative self-perception makes them willing to do anything to gain long-awaited acceptance from others. They also tend to have emotional addictions. They do not appreciate or respect themselves. The inner emptiness is so immense that they must fill it with something.

Difficulty Complying With Rules And Authority

From early childhood, individuals with dependent personalities defy their parents or guardians, who are regarded as the primary authority figures. This trait is maintained in its various stages of development, reaching adulthood with serious problems following rules and obeying authority.

To conclude, it is true that behind every addict, there is a unique personal story and characteristics of their own. However, common elements are almost always seen, which allows us to evaluate the risk that someone close to ending up in a situation as problematic as it is dangerous.

Read Also: Sciatic Nerve: How To Cure It When Inflamed

Better Water And Drinks For Children