Calories In Meat: What To Look Out For 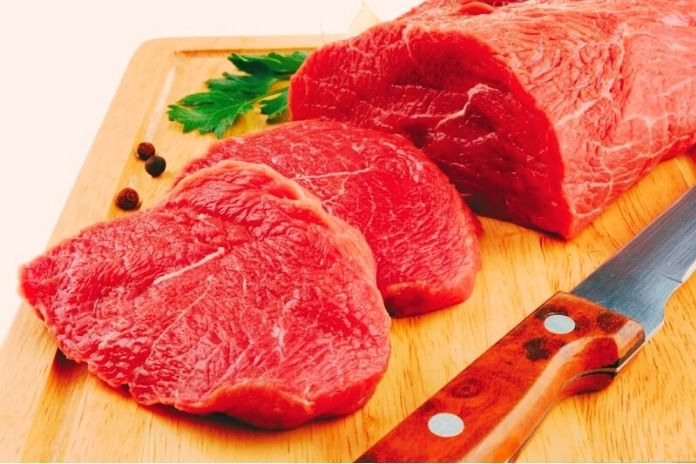 Calories In Meat: Many people find one thing difficult when reducing calories or dieting: reducing meat consumption. The meaty temptations waiting for us on every corner seem too tasty. A meal that only consists of foods and vegetables containing carbohydrates is not perceived as complete by many people – after all, there would also be space on the plate for a delicious steak, pork chop, sausage or a piece of roast. Only one thing disturbs this train of thought: The high number of calories that consuming meat brings with it.

No question about it, despite the many calories, meat is, of course, healthy due to its nutritional values. It provides us with a lot of protein, calcium, iron and B vitamins. Nevertheless: Meat shouldn’t be on your menu every day if you think about the calories and want to eat healthily. The downside of high meat consumption is that you consume too much fat and purines. Too much fat and, therefore, too many calories in meat will inevitably fail any attempt at diet. Too many purines can increase the uric acid level and, in the worst case, to gout and kidney diseases.

Despite dieting, you do not necessarily have to forego every bite of meat because of the calories and thus become a vegetarian. If you choose carefully, nothing stands in the way of eating meat two or three times a week. The most low-calorie hearts are poultry. However, there are a few things to consider here: goose and duck are very high in calories. You can expect around 300 calories per 100 grams of goose meat. Accordingly, it would be better to reach for chicken breast and turkey schnitzel when watching your calorie intake. Chicken meat has around 90 calories per 100 grams, and a turkey schnitzel has about 130 calories. But: All calorie-conscious eating will not help if you only get chicken in the pan,

It can be a fillet of pork, lamb, beef, or veal from time to time. These particularly tender cuts of meat don’t have too many calories compared to other meats. For example, a beef fillet has 115 calories per 100 grams.

It should not be forgotten that cold cuts often consist of fatty, high-calorie pork. As an alternative, it is better to use sliced ​​chicken and turkey.

It’s clear what’s coming. Of course, this is followed by a list of particularly delicious meat dishes, but due to the calories they contain, it is better to keep your hands off them.

Ribs, pork belly, beef brisket, roast pork, pigeon, duck, goose legs, roast wild boar, and pork and beef sausages do not do well in terms of calories. Even the chicken can turn out to be a calorie bomb if it comes with skin, legs and is marinated as a roast chicken or chicken wing. Fatty poultry, beef and pork can have up to 300 calories per 100 grams.

So it would be best if you always thought twice about replacing these high-fat, high-calorie delicacies with lean meat. Often, new, tasty creations come out that one would not have expected before. Just try it out and experiment!

Last but not least, the preparation decides whether the selected piece of meat becomes a calorie bomb or not. If, for example, low-calorie chicken is coated with a thick coating of eggs, flour and breadcrumbs and then fried, it is clear that nothing comes out that should be consumed during a diet. The pan, which is filled with oil to sear a turkey escalope, should also be relegated to the back rows of the cupboard. However, there are some forms of preparation in which meat can be prepared tasty but still low in calories.

Barbecue fans will be happy: Grilling is an excellent alternative to the pan. Here you are not forced to use vast amounts of oil. The fat that is still in the meat and its calories are even partially removed and therefore do not end up on the plate. In addition, there are the typical grill flavors that make eating meat an absolute pleasure even without additional calories. Of course, it is also clear that you should avoid fatty, high-calorie meats.

Another way of gently preparing meat without adding any fat is steaming it. The heart does not get crispy, and the delicious roasted aromas are missing, but it is exceptionally tender, which is also a great pleasure. So our conclusion: Meat without additional calories can also taste delicious – women have to know how it’s done.

Preparing Meat In A Wok

A wok is also ideal for preparing lean, low-calorie meat. It conducts the heat well, and you hardly need any fat for frying. If you want to try it without any fat, you can wet it with a bit of mineral water to prevent it from burning. Make sure, however, that your work has a non-stick coating.

ALSO READ: Make Us Fit & Beautiful: You Should Know About Vitamins!

The Four Best Yoga Exercises For A Flat Stomach

The Four Best Yoga Exercises For A Flat Stomach