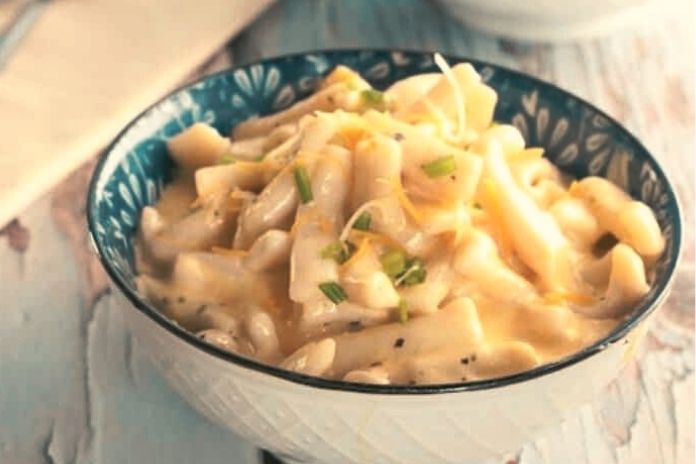 Carbohydrate-Free Pasta: What are low-carb noodles made of? And do the pasta alternatives taste good without carbohydrates at all? We tested them. Low-carb diets are all the rage. But let’s be honest, giving up carbohydrates is not always easy. No bread? No pasta? It doesn’t work at all!

Fortunately for all bread and pasta lovers, the food industry is not idle. Low-carbohydrate protein bread has been around in the supermarket for quite a while. You can argue about the taste, but some variants are now considered delicious. Slowly, low-carb noodles are making their way into the shops. How do they taste? We took the test and tried it out: from soy spaghetti to shirataki noodles, also known as kajnok, to edamame pasta.

Carbohydrate-Free Pasta: How Do You Cook Soy Spaghetti?

The health food store or the organic supermarket is our first stop. Here, you will find organic soy noodles, i.e., noodles made from durum wheat semolina instead of 100 percent soy. This means that the protein content is 45 g per 100 g of low-carb pasta. The carbohydrate content is reduced to 36 g per 100 g. In other words, significantly fewer carbohydrates than in conventional pasta (they have around 70 g of carbohydrates per 100 g of pasta).

Taste Test: The soy spaghetti tastes like nothing on its own. But they take on the taste of the sauce well. The consistency is a little rubbery but still okay. So can go through as an alternative.

Saturation Factor: Similar to whole wheat pasta. The soy noodles keep you full for a long time, and hunger only comes back after four or five hours.

We are excited about the so-called shirataki noodles after the soy spaghetti has come halfway close to the authentic noodles. You can find them in big Asian shops. We can hardly believe it when we look at the nutritional information: 100 g contains 17 kcal, 0 g protein, 0.1 g fat, and 3.2 g carbohydrates. They’re practically calorie-free! This is why they are also called “Miracle Noodles” in English-speaking countries.

However, the preparation is a bit of an effort. When you open the pack, you get an unpleasant fishy odor. I have no idea where it comes from – the Shirataki noodles are fish-free and consist only of water and konjac flour (made from the konjac root).

The noodles must be cleaned thoroughly under running water (about 1 minute). Shirataki noodles are now available in all shapes and sizes, whether as wobbly pieces, spaghetti, or in the form of rice. After washing, the pasta is cooked in hot water or directly in the vegetable pan.

Taste Test: Shirataki noodles taste like nothing, and the food takes a lot of getting used to due to its slightly spongy consistency. They may be reminiscent of rice noodles, but they are miles away from traditional noodles.

Saturation Factor: Most people find their saturation relatively poor and feel hungry again after two hours. It would be best to prepare the noodles with many vegetables, meat, fish or tofu.

How Is Kajnok Spaghetti Different From Shirataki Noodles?

There is no real difference between kajnok spaghetti and shirataki noodles. Both are made from the konjac root. The crucial difference: Kajnok is just the manufacturer’s name. That’s why they only have 8 kcal per 100 g and contain neither sugar nor fat. They are sold in well-stocked supermarkets. Unlike the original from the Asian store, these do not have an unpleasant fishy smell.

Preparing kajnok noodles is very easy: Rinse briefly underwater, add the vegetables and meat to the pan, and cook for 2 minutes.

Taste Test: Kajnok spaghetti has no taste of its own and therefore goes well with every dish – whether it is an Asian pan or spaghetti Bolognese. The consistency, however, leaves a lot to be desired. The spaghetti is a bit tough and rubbery.

Saturation Factor: Your stomach growls again after just two or three hours. To keep you full a little longer, you should serve the pasta with vegetables and meat.

What Can Pasta Made From Legumes Do?

There are now pasta variants made from the flour of legumes. Speak of red lentil flour, pea flour, or chickpea flour. These deliver similar values ​​to soy pasta but are an excellent euro cheaper and can be found in well-stocked supermarkets. The preparation is the same as for whole meal pasta:

Taste Test: This pasta can compete with whole grains in terms of taste.

Saturation Factor: The lentil or pea noodles are just as filling as soy noodles and are natural.

There is a new star in low-carb pasta heaven: Edamame pasta! The small, bright green soybeans are also legumes and, like lentils and peas, are full of fiber. At the same time, edamame beans hardly contain any fat or sugar. This makes edamame pasta a particularly low-calorie, low-carb variant. Thanks to its greenish color, edamame pasta is also extraordinarily appetizing and looks almost as healthy as it is.

Taste Test: Edamame pasta from Slendier contains only 4 g of carbohydrates per 100 g. They are available as thin spaghetti and wide fettuccine. Both variants still have a bit of bite after cooking in salted water and taste slightly nutty. They go well with pesto as well as cream or tomato sauce. All our comparison noodles come closest to the classic wheat noodles.

Satisfaction Factor: The bean pasta keeps you full as long as noodles are made from other legumes or cereals. Thumbs up!

Low Carb Noodles – Do They Have To Be?

The edamame pasta and soy noodles were excellent, but honestly, they were also quite expensive at just under 3 to 4 euros per pack! The Kajnok noodles, now available from Edeka, Rewe, and Co., are cheaper but not quite as filling.

From a nutritional point of view, you can safely save yourself low-carb noodles. Yes, they contain fewer carbohydrates and more protein. As a result, the blood sugar level does not rise dramatically after consumption, as it does after regular pasta.

BUT: We can have all of this with whole grain pasta. They still have around 60 g of carbohydrates per 100 g, but these belong in the “complex carbohydrates” category. That means: They also have a more negligible influence on the blood sugar level.

If you want to eat cleverly and save money simultaneously, you can choose whole meal pasta with a clear conscience. If we eat this low-carb pasta with a large portion of vegetables and a protein side, we have a healthy, balanced meal on our plate that does not make us fat.

ALSO READ: Losing Weight By Walking: Does It Really Work?