HomeWEIGHT LOSSLosing Weight With Coconut Oil: Does It Make You Slim?
WEIGHT LOSS

Losing Weight With Coconut Oil: Does It Make You Slim? 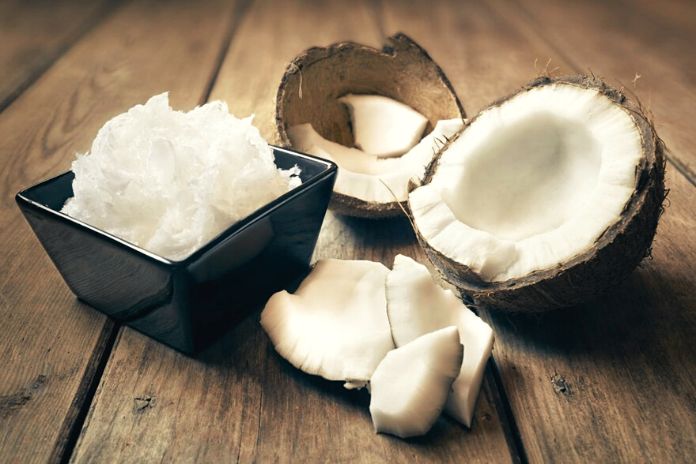 If you believe the reviews online, coconut oil is said to be a real slimming miracle. Just one tablespoon a day is said to shed the pounds. But what’s the hype about? Can you lose weight with coconut oil? We checked the facts.

The fact is: that many people swear by the favourable properties of tropical coconut oil. But it is also a fact: the supposed superfood is not as healthy as most people think. Scientists recently confirmed this because coconut oil consists primarily of saturated fatty acids.

The advantage of coconut oil over other fats: it mainly contains medium-chain fatty acids. They are also referred to as MCT = medium-chain triglycerides. These fats provide a lower energy value, around ten percent less than other fats. This even increases energy consumption. This means that the body burns a little more calories at times.

How Healthy Is Coconut Oil For Weight Loss?

So does this mean that you should now consume more coconut oil if you want to lose weight? Not really. While there is evidence that coconut oil boosts metabolism, coconut fat is mainly made up of saturated fats. These are considered bad for health, especially for the cardiovascular system.

Therefore, the consumption of saturated fatty acids, such as those found in coconut oil, palm fat, butter, meat, and sausage products, should be limited to a maximum of ten percent of the total energy intake, which also corresponds to the recommendation of the Society for Nutrition (DGE).

Two studies from 2009 and 2011 examining whether coconut oil intake could help reduce belly fat found that subjects who consumed 30 ml of coconut oil daily lost volume in the abdominal region.

But you can’t lose weight with coconut fat alone. A long-term change in diet with more exercise and higher energy consumption is more important. A diet containing medium-chain fats can activate food-induced thermogenesis, i.e., increased energy consumption. However, the EDGE showed that this effect was not decisive.

The EDGE has the results of various studies that studied the intake of medium-chain fats such as coconut oil concerning obesity. It was found that MCTs can help reduce body weight and fat percentage. However, these were short-term studies and had some weaknesses in their implementation.

For example, different amounts of medium-chain fatty acids were used in the studies, the study groups were relatively small, and there was no evidence of the subjects’ diet and exercise habits that might influence weight loss.

No Recommendation For Coconut Oil For Weight Loss

Neither the EDGE nor the Obesity Society recommends consuming medium-chain fats such as coconut oil to lose weight. In its conclusion, the EDGE points out that the energy saved by MCT is only around 80 to 120 kcal. However, these calories can easily be held in other ways, for example, by avoiding sweetened drinks and desserts, according to the EDGE.

If You Want To Lose Weight, Try Clean Eating!

An excellent alternative to a classic diet that aims to do without is what is known as ‘ clean eating. ‘ It’s a surprisingly simple diet. Clean eating is less about doing without or losing weight quickly and more about a conscious and healthy lifestyle. This makes it possible to lose weight permanently and live healthier.

Instead of coconut oil, it is better to rely on superfoods such as chia seeds because they are not only packed with healthy fats and nutrients but also fight cravings due to their swelling properties.

ALSO READ: Protein Bread: Does This Bread Make You Lean?

Gain Health And Slow Down Aging With Physical Activity