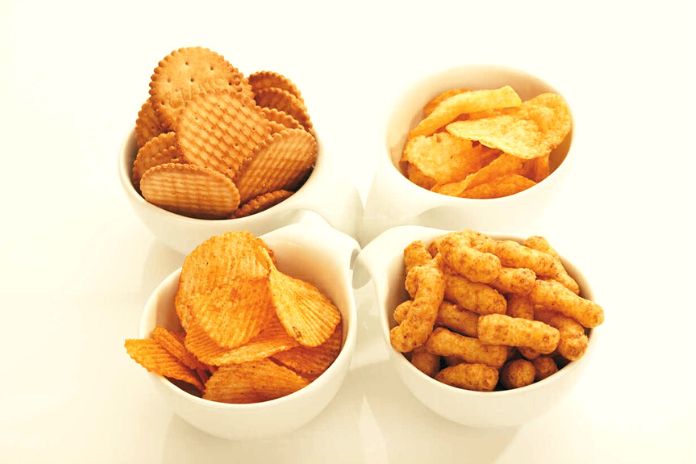 Sweets & snacks such as chips, chocolate, & Co. taste good but are natural fattening foods. We’ll show you how many calories the snacks have, and which snacks are relatively low in calories.

TV evening with the girls: get on the sofa, watch your favourite series and reach for the bag of chips. Or in the popcorn bowl. Or the peanut chips. You can’t have that many calories, like a few wafer-thin chips. And popcorn is just fluffed up corn kernels.

Are you kidding me? Are you serious when you say that! The little nibbles are real calorie bombs. But don’t worry – you don’t have to do without the small snacks completely. Chips and Co. are part of it but in small quantities. Fill the snacks in a small bowl, and don’t leave the open bag around. And of course, there are also a few snacks that are a little lower in calories. We’ll tell you how many calories your favourite snack has here:

Potatoes are one of the staple foods, and that’s why you can’t go wrong with potato chips? Unfortunately, that is wrong. Well fried, chips are real fat bombs. One hundred grams has 539 kcal, of which almost 40 grams are fat. Scandalous, because let’s not kid ourselves, 100 grams are gone in a flash if you sit comfortably in front of the TV and reach into the bag repeatedly.

Pretzel sticks or pretzels, i.e., pretzels to nibble on, are undoubtedly the cheapest choice of nibble in terms of calories. Five pretzel sticks have only 26 kcal, 100 grams 382 kcal. But: With only 5 grams of fat, they are at least not a fat trap. Try the whole grain version. It still contains some fibre and is a bit healthier.

Peanut chips or potato chips? Everyone has their preferences. As far as the calorie content is concerned, there is little difference between the snacks. Flips have 533 kcal per 100 grams, of which 34 grams are fat, similar to potato chips.

Yummy peanuts! And we should eat nuts more often because they contain healthy fatty acids… It’s true, but peanuts are a snack you should only eat in moderation due to the high number of calories: 100 grams of nuts have 585 kcal, of which almost 50 grams are fat. Buy the shelled nuts instead of the shelled ones. Because we have to attack the nuts ourselves, we eat significantly less of them.

Popcorn is made from corn kernels. They heat up and pop open. You can’t have that many calories. Wrong thought! One hundred grams of popcorn still has almost 400 kcal, but only 4 grams of fat. Unless you drizzled the popcorn with melted butter, then, of course, it has more fat.

The best variant: Homemade popcorn. You know exactly how much sugar you used. By the way, salted popcorn is even lower in calories. Be sure to try it!

Nachos or tortilla chips are comparable to chips in terms of calories and fat. One hundred grams have about 500 kcal and 22 grams of fat. The fatal thing about nachos: We often eat them with a dip. No problem if it’s a fiery chilli sauce. It does contain sugar but no fat. The situation is different with cheese dips. As the name suggests, they have plenty of cheese, and it’s pretty greasy.

It’s mean. Grissini, which looks harmless and low in calories in terms of appearance and consistency, is also challenging. One hundred grams has 400 kcal. However, only around 8 grams of fat. So they do pretty well compared to chips and flips.

Crackers are a delicious alternative to chips and the like because you can serve them wonderfully with wine and cheese. As far as calories are concerned, there is hardly any difference at first glance. Crackers contain 442 kcal per 100 grams. However, they’re not quite as greasy as chips, having only 14 grams of fat.

Rather than chips and flips, would you prefer hearty cheese sticks made from puff pastry? You will undoubtedly save a few calories. But it’s not worth it. One hundred grams has 416 kcal and 32 grams of fat. Blame it on the puff pastry, which is made of many layers filled with butter.

ALSO READ: Cake Calorie Check: What Are The Most Significant Fattening Foods?

Food-Grade Diatomaceous Earth: What Is It For?