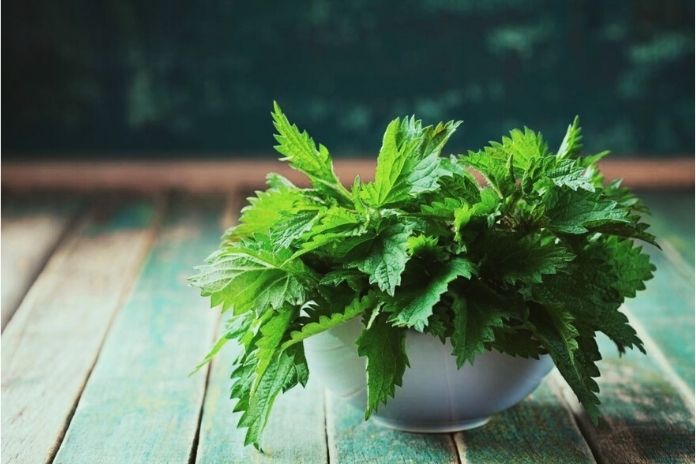 Nettle tea works against many ailments and is a recognized home remedy. As the fresh plant stings many an ankle, the effect as a remedy is just as positive. Nettles grow everywhere in our latitudes. And anyone who carelessly messed with these plants will remember them for a long time. The well-fortified herb lives up to its name, but as a tea, stinging nettle has a soothing effect on various ailments. Everyone has probably involuntarily made acquaintance.

Tip: If you want to eat nettle leaves raw, you should first go over them with a rolling pin. As a result, the delicate stinging hairs break off and are rendered harmless.

“Because people prefer to keep their hands off the naturally growing stinging nettle because of its burning properties, the diverse positive effects on the human organism were almost forgotten,” regrets naturopath. “The stinging nettle is a medicinal plant with a high content of vital substances that is misunderstood as a weed. Hippocrates already mentioned it in his writings.”

Nettle is a versatile medicinal herb that can be used in many different ways. The healing nettle is said to have a cleansing, detoxifying, refreshing, and even potency-enhancing effect. Nettle tea made from leaves and roots has many favorable properties that support the human organism. Nettle tea is best known for its diuretic effect. Therefore, tea is often used to remedy urinary tract and bladder diseases. Nettle also has an analgesic and anti-inflammatory effect.

In addition, stinging nettle is of exemplary service in the case of anemia due to iron deficiency. In traditional herbal medicine, bitter nettle tea is also used for heavy menstruation prostate problems and to help with arthritis and arthrosis, i.e., gout and rheumatism.

Applied externally, nettle is used as a remedy against dandruff and hair loss. Due to its anti-inflammatory and analgesic effect, stinging nettle is also used in various forms to treat joint pain or skin inflammation such as acne.

Taste: Dried nettle leaves as tea does not taste that good to some people. If you brew the tea and only drink it when it’s cold, the taste won’t be as intense.

Others who like the tea taste unobtrusive, fresh green with a hint of sea aroma. The tea made from fresh nettle leaves tastes finer, sweeter, and resembles spinach. “Depending on personal taste, nettle tea can also be mixed with other types of tea,” recommends Josefine Schulz.

Are There Side Effects With Nettles?

There are no known side effects from nettle leaves, except in the case of an overdose, which can lead to diarrhea. Therefore, the recommended amount of 4 to 12 g per day should not be exceeded. If the root is used, it can lead to gastrointestinal complaints here. The daily maximum is 4 to 6 g. Start low at first and increase slowly.

Pour boiling water over the leaves and leave covered for 10 to 15 minutes.

This recipe suggestion comes from the book mentioned above: “Self-healing with herbs: herbal medicine for the home.”

Here’s how it works: Boil water, cover the leaves with it, leave for 5 minutes, then strain. Three cups of nettle tea daily are recommended for four weeks as a dehydration cure. Best always with a glass of water to avoid dehydration.

Nettle is also not recommended for people with heart or kidney problems.

Stinging nettle provides many essential ingredients: Vitamins, magnesium, potassium, calcium, silicon, and iron. Nettle leaves, seeds, and roots can be used in various ways. The leaves are commonly eaten or consumed freshly brewed or dried and drunk as tea. A veritable nutrient cocktail, nettle is one of the most exciting plants our latitudes have to offer. And yet the stinging nettle is notorious as a “weed.” Stinging nettle is rich in vitamin B, vitamin E, provitamin A and contains three times more vitamin C than broccoli, for example, writes the Federal Office for Nutrition.

Nettle As A Valuable Food

According to the Federal Office for Nutrition, nettle can be a valuable source of iron and protein, especially for a meat-free diet. Health expert Josefine Schulz also knows: “[…] vegans and vegetarians [can] use stinging nettles to maintain their iron and protein levels.”

Schulz explains the tremendous benefits of integrating stinging nettles as a natural, seasonal food into a varied diet. Fresh nettle is excellent with other herbs in salads, smoothies, or herbal quarks. Blanched nettles can also be eaten like spinach.

It is best to collect nettles from your garden and on nitrogen-rich soil. It would be best not to collect wild nettles directly on the roadside but instead on the edge of fields or forests away from roads. The best time to harvest nettles is just before flowering in June, ideally around midday when the dew has dried.

Be sure to wear gloves for protection and use scissors or, preferably, a ceramic knife. Don’t harvest the entire plant, only the upper sections, so that the plant can develop new shoots and thus continue to live.

In the case of severe illnesses and to rule out interactions, this home remedy should only be used after consultation with the doctor treating you. The content of this article is for informational purposes only and does not replace a diagnosis from a doctor.

ALSO READ: Is Ginger Healthy? It Has These Effects On The Body